HAIR CLONING: THE ONLY SOLUTION WHERE FUT AND FUE ARE NOT POSSIBLE

And each withdrawal both FUE and FUT leaves a shortfall in the donor zone: a series of minuscule shortages in the case of FUE when each withdrawal is replaced by a small scar, or an entire withdrawal of a strip of scalp that will be replaced by a long scar obtained by approaching the two flaps of the collection. While with FUE withdrawals the density of the donor zone decreases since the shortages are distributed over the entire surface, in the case of FUT is the whole donor area that shrinks being deprived of all the strip of scalp that is removed.

FUT and FUE when they admit their impotence

So when the Norwood classification is too high, when the number of necessary follicular unit transplants is such that the donor zone is not able to provide it, the patient will feel excluded from the possibility of performing a transplant. The trichologist or the prudent dermatologist may, in the case of a patient classified in the Norwood case study that we have considered, propose instead a hair transplant technique that is not based only on the number of follicular units available in the donor area, but that through a particular hair stem cell transplantation can multiply the number of them.

HST gives hope to patients who have been denied

The technique in question is called HST ( Hair Stemcell Transplantation) or with another acronym PL FUT (Partial Longitudinal Follicolar Unit Extraction). It is also known as Hair Moltiplication or even Doctor GHO’s technique. With this technique, which works with a principle reminiscent of cuttings in plants, the surgeon uses needles or punches of microscopic diameter of the size of 0.6 millimeters for the removal of grafts. At the size level, the size of these tiny punches is less than that of a follicular unit. This means that the punch, penetrating inside the follicular unit, takes only a portion of it.

This means that the follicular unit is not taken entirely as in the case of the FUE that uses larger punches, it is divided into two portions: one that remains in the donor area and the other that is transported and transplanted in the receiving area. Each of these two portions contains sufficient hair stem cells whose function is to allow each of the two portions to reconstitute two new follicular units equal to the initial unit from which the samples were taken.

Why Grafts taken with HST survive

If it were enough to use punches of these small dimensions to obtain the multiplication of the follicular units, then everyone would be able to practice this technique. Instead of the grafts when they are extracted with these tiny punches, they are so thin that they are practically devoid of fabric. This means that hair stem cells are practically bare and are therefore extremely exposed and delicate. Such a graft would have no chance of surviving. It would be taken, but unusable because it would not survive. Then comes into play the treatment to which the graft is subjected: it must be able to survive and to do this it is immersed in a patented medicinal compound similar to the substances used for the maintenance of organs used in transplants. The passage in this compound allows the graft not to perish and at the same time gives it that vitality that is necessary for it to be transplanted in the receiving area and to survive the transplant. 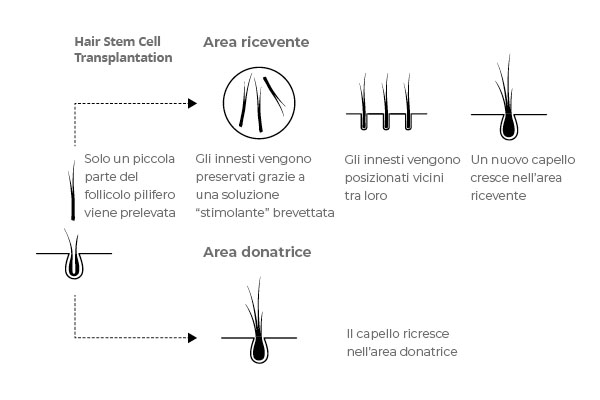 With HST the donor zone is regenerated

It is therefore clear from the above that the follicular units transplanted partially give rise to the birth of two separate follicular units; one is the one that in the donor area returns to find its configuration ante withdrawal, thus contributing to the restoration of the donor zone. A second in the receiving area that grows back exactly equal to the follicular unit of origin which is simply multiplied by two, thus giving rise to the phenomenon that in scientific literature is called Hair moltiplication. This is the real and profound difference compared to the FUT and FUE techniques that are so well known and practiced today but that are impossible to use in the most important cases of baldness and that leave without the possibility of treatment. So even in cases where FUE and FUT are possible, what differentiates them from the HST technique is that while they simply move the follicular units from the donor zone to the recipient zone, leaving after the displacement a shortfall at the point of withdrawal, with HST instead there are no shortages and what is taken multiplies by two, preserving the donor zone and filling the receiving zone.