WHEN THE DONOR AREA IS INSUFFICIENT OR COMPLETELY UTILIZED

Book now
There are patients who have already undergone one, even sometimes two hair transplants maybe with FUE technique or even with FUT STRIP. Or they want to restore with autotransplant a large baldness. When alopecia is very large, those who suggest hair transplant procedures try to please the patient as much as possible. Every time, and this above all when these interventions are carried out abroad, with the motivation of a low cost, in order to avoid to return the patient a second time, a mega operation is promised to him, transplanting him, after having uprooted him, something that can reach even 5000 follicular units. 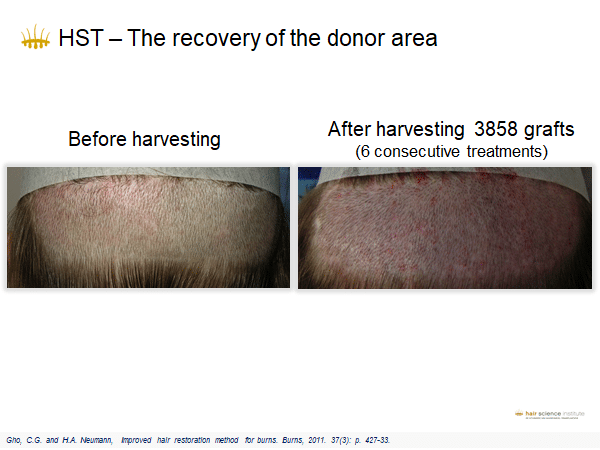 The risks of a mega hair transplant, necrosis and depletion of the donor zone

A mega hair transplant has two main drawbacks : the first concerns the risk of necrosis of the scalp that is traumatized by an exorbitant amount of injuries due to the implantation of so many Grafts. The second is that so much withdrawal of follicular units from the donor zone often ends up making it completely emptied and perhaps even at the limit of the follicular capital it has. Sometimes in the frenzy of weeding out follicular units the surgeon or nurse technician also access non-adhydroxysterone insensitive zones. The patient is then transplanted sometimes also follicular units that instead are destined to fall, because similar to those already fallen. However with mega withdrawals of this type, if you do not fall into necrosis, it is very likely instead and practically certain in the majority of cases that you get an emptying of the donor zone, and this in greater proportions more it is meager.

Consequences of a transplantation of too many follicular units FUE technique

The consequences of this are unfortunately nefarious and disappointing : first of all even with 5000 follicular units you will not get a satisfactory restoration if we are in cases of Norwood scale 5 or higher. In the majority of cases, the patient will get a frontal line quite backward, so as to have, at least in front of the mirror, an idea of reinforcement. Then, beyond the frontal part, moving back on the head, the follicular units will be transplanted in a less and less dense hoping to reach the maximum possible surface. In most cases, however, the cleric will remain uncovered or, at best, very sparse. The problem is that having depleted the donor zone of almost everything it could give in terms of donor capital, the patient finds himself no longer having the opportunity to repeat the surgery having almost exhausted the units to be transplanted and finding himself with a transplant with an incomplete and therefore unsatisfactory appearance, compared to the idealistic idea that every patient has of the transplant : you dream of becoming again like when you had a thick hair. And those who operate it often cradle it in this false idea by tickling it with the unspoken risks of interventions of vast « migration » amount of follicular units. What a disappointment to find yourself with half head semi-bald or at best half-naked. And being told, later, when the desire drives him to consult again to finally arrive at that result that unfortunately despite the illusions he could not achieve, which unfortunately his donor zone will not be able to donate anything because completely exploited.

With the aggravating circumstance that after many withdrawals the patient will have obtained a donor zone with many small shortages that will make it impossible to bring short hair because the shortages will be unpleasantly in evidence. So far we have talked about FUE hair transplant.

Things do not improve if instead the patient on his way to the restoration of his hair has instead relied on interventions FUT (Follicular Unit Transplantation) also known as STRIP. In fact, this type of surgery proposes to literally cut away from the donor area an entire portion of the scalp and then divide it into many portions of tissue containing follicular units. Certainly, with a good surgeon, large quantities of follicular units are obtained from such a sample, even more than 4500.

As in the aforementioned case of a mega intervention of FUE (Follicolar Unit Extraction). The price the patient pays for this surgery is, let’s say, quite high. And I’m not talking about the cost of the intervention itself that if it were a solution it would be the lesser evil. It is instead primarily the operation itself which is much more challenging than a simple extraction of follicular units, It is in fact a real surgical operation that involves a suture at the origin of a long scar and a very complex post-operative course and sometimes painful or unpleasant.

The stitches must be removed after at least a week, the cocatrization may be at the origin of annoying itches, the follicular units cut into tiny squares of tissue should instead be inserted into holes of round shape, with the possible formation of orange peel surfaces due to the insertion of a square in a round.

As in the case of FUE even with so many follicular units the result will be incomplete, with areas that at best will be only slightly repopulated. Not to mention the long scar on the back of the head that will constitute a block to the fact of wearing short-cut hair.

Today there is a technique that is able to provide the patient with a satisfactory solution when he is in one of the following situations : a large baldness of at least level 5 on the Norwood scale, with at least 30/40 percent follicular units absent. The patient may never have undergone surgery, or may have undergone one or more interventions with traditional techniques without having solved with satisfaction his problem. In any case the situation is summarized as follows : large area of baldness to be treated, donor area still insufficient to solve the present case with the amount of follicular units still available in the donor area.

The result with traditional techniques will still be unsatisfactory and in the worst situation, when the interventions have been performed this donor area will be completely unusable and in any case unpresentable if not hidden behind long hair properly combed.

The technique that is the solution to the problem is called HST, which stands for Hair Stemcell Transplantation, and in a longer form is called PL FUT, or Partial Longitudinal Follicular Unit Transplantation. This technique consists of only partial sampling, using 0.5/0.6 mm punches, of very small grafts, practically devoid of skin tissue.

The purpose of these partial withdrawals is that the hair stem cells contained in a follicular unit, if divided into two portions, one partially removed and the other remaining in situ in the donor zone, are both capable of reproducing the same follicular unit in two different places, the one of origin of the collection in the donor area and the one in the receiving area after the transplantation. In other words, each follicular unit thus treated generates two of exactly the same type and nature. It’s what’s called Hair multiplication, which is the multiplication of follicular units.

It can be clearly understood how this multiplication can solve the problem of insufficient donor areas. Of course this can happen over time, with successive phases, spaced at least nine months between two successive interventions, in order to allow follicular units in both the donor and the recipient zone to regrow under existing conditions prior to partial sampling. It is so that the cases mentioned above can find solution with complete satisfaction of the patient that will have multiple benefits, an extremely simple post-operative period, without bandages and without scabs, without itching and without risk of necrosis. Without fibrous hardening of the scalp. In addition, at each operation its donor zone will regenerate as before being taken, with a situation incomparable to the cas previously examined.